The Chrysler Building is an Art Deco Style skyscraper located on the East Side of Midtown Manhattan in New York City, at the intersection of 42nd Street and Lexington Avenue in the Turtle Bay neighborhood of Manhattan. At 1,046 feet (318.9 m), the structure was the world’s tallest building for 11 months before it was surpassed by the Empire State Building in 1931. It is the tallest brick building in the world with a steel structure. As of 2015, the Chrysler is the fifth-tallest building in the city.

Art Deco, sometimes referred to as Deco, is a style of visual arts, architecture and design that first appeared in France just before World War I.[1] Art Deco influenced the design of buildings, furniture, jewellery, fashion, cars, movie theaters, trains, ocean liners, and everyday objects such as radios and vacuum cleaners. It took its name, short for Arts Decoratifs, from the Exposition Internationale des Arts Decoratifs et Industriels Modernes (International Exhibition of Modern Decorative and Industrial Arts) held in Paris in 1925. It combined modernist styles with fine craftsmanship and rich materials. During its heyday, Art Deco represented luxury, glamour, exuberance, and faith in social and technological progress.

Art Deco was a pastiche of many different styles, sometimes contradictory, united by a desire to be modern. From its outset, Art Deco was influenced by the bold geometric forms of Cubism; the bright colors of Fauvism and of the Ballets Russes; the updated craftsmanship of the furniture of the eras of Louis Philippe and Louis XVI; and the exotic styles of China and Japan, India, Persia, ancient Egypt and Maya art. It featured rare and expensive materials, such as ebony and ivory, and exquisite craftsmanship. The Chrysler Building and other skyscrapers of New York built during the 1920s and 1930s are monuments of the Art Deco style.

Oscar Claude Monet – November 14, 1840 – December 5, 1926) was a founder of French Impressionist painting, and the most consistent and prolific practitioner of the movement’s philosophy of expressing […] 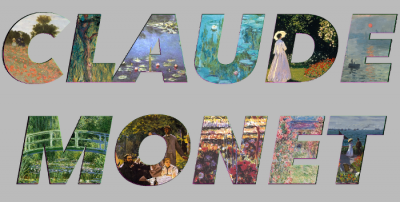 Oscar Claude Monet – November 14, 1840 – December 5, 1926) was a founder of French Impressionist painting, and the most consistent and prolific practitioner of the movement’s [...]