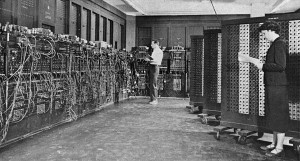 The completed ENIAC machine was announced to the public the evening of February 14, 1946 and formally dedicated the next day at the University of Pennsylvania, having cost almost $500,000 – approximately $6,000,000 in today’s dollars.
By today’s standards for electronic computers the ENIAC was a grotesque monster. Its thirty separate units, plus power supply and forced-air cooling, weighed over thirty tons. Its 19,000 vacuum tubes, 1,500 relays, and hundreds of thousands of resistors, capacitors, and inductors consumed almost 200 kilowatts of electrical power.

In 1995, a very small silicon chip measuring 7.44mm by 5.29mm was built with the same functionality as ENIAC. This 20 MHz chip was many times faster than ENIAC.

More on the ENIAC Story can be found here.

But ENIAC was the prototype from which most other modern computers evolved. It embodied almost all the components and concepts of today’s high- speed, electronic digital computers. Its designers conceived what has now become standard circuitry such as the gate (logical “and” element), buffer (logical “or” element) and used a modified Eccles-Jordan flip-flop as a logical, high-speed storage-and-control device. The machine’s counters and accumulators, with more sophisticated innovations, were made up of combinations of these basic elements.

ENIAC could discriminate the sign of a number, compare quantities for equality, add, subtract, multiply, divide, and extract square roots. ENIAC stored a maximum of twenty 10-digit decimal numbers. Its accumulators combined the functions of an adding machine and storage unit. No central memory unit existed, per se. Storage was localized within the functioning units of the computer. 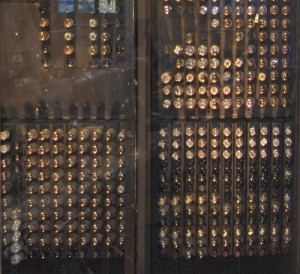 Detail of the back of a section of ENIAC, showing vacuum tubes

The primary aim of the designers was to achieve speed by making ENIAC as all-electronic as possible. The only mechanical elements in the final product were actually external to the calculator itself. These were an IBM card reader for input, a card punch for output, and the 1,500 associated relays. 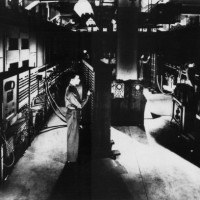 Cpl. Irwin Goldstein (foreground) sets the switches on one of ENIAC’s function tables at the Moore School of Electrical Engineering. (U.S. Army photo) This photo has been artificially darkened, obscuring details such as the women who were present and the IBM equipment in use.

Where can we see ENIAC today?