Warning: "continue" targeting switch is equivalent to "break". Did you mean to use "continue 2"? in /homepages/29/d203955307/htdocs/allwoodc/courier/wp-content/plugins/social-networks-auto-poster-facebook-twitter-g/inc/nxs_functions_engine.php on line 175
 Featured Artifact – Patience and Fortitude | Allwood Courier ↓
Home Menu ↓
Home→Artifact→Featured Artifact – Patience and Fortitude

Patience and Fortitude – The Library Lions

Patience and Fortitude are the two most famous lions in the US. They are the pair of marble lions that guard the New York Public Library, and were given their names by Mayor Fiorello La Guardia during the Depression for the qualities that would get New Yorkers through their testing times. Legend has it that they were originally called Leo Astor and Leo Lenox after the library’s founders, John Jacob Astor and James Lenox. 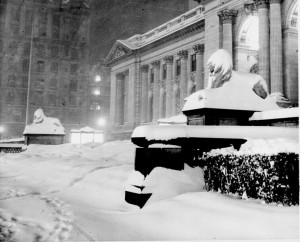 “Patience” and “Fortitude”, the “Library Lion” statues, in the snowstorm of Dec. 1948

The New York Public Library logo includes a lion. When originally unveiled, the lions were not well received. “Squash-faced” and “mealy-mouthed and complacent” were some criticisms. One letter – writer to the New York Times said “We don’t want square-jawed lions” and another called them “a cross between a hippopotamus and a cow” and “monstrosities”. Current Library President Paul LeClerk disagrees – he said “Their scale and their benign composure really set them apart from any other lions flanking any other building – radiate is calm and strength, majesty, tranquility, all really good things to be sending as signals at a library.” 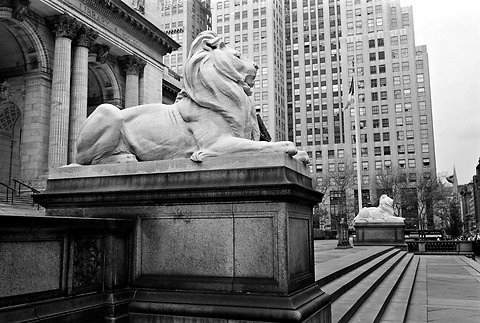 The Lions have adorned the Library steps since 1911, when the Library was dedicated. They officially sit in front of the Beaux-Arts Building, the formal name for The Library building. They are treasured and lovingly cared for. Patience and Fortitude are now the Library’s mascots; they’ve been trademarked and serve as the Library’s logo. They were originally carved out of marble for $5,000 and have survived exposure to the elements in New York until 2004, when they were finally cleaned and restored. That’s 93 years without taking a bath!