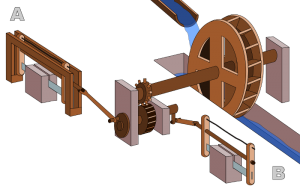 The Hierapolis sawmill was a Roman water-powered stone sawmill at Hierapolis, Asia Minor, modern-day Turkey. Dating to the second half of the 3rd century AD, the sawmill is the earliest known machine to combine a crank with a connecting rod.

Scheme of the water-driven Roman sawmill at Hierapolis, Asia Minor. The 3rd century mill is the earliest known machine to incorporate a crank and connecting rod mechanism

The watermill is evidenced by a raised relief on the sarcophagus of a certain Marcus Aurelius Ammianos, a local miller. On the pediment a waterwheel fed by a mill race is shown powering via a gear train two frame saws cutting rectangular blocks by the way of connecting rods and, through mechanical necessity, cranks. The accompanying inscription is in Greek and attributes the mechanism to Ammianos’ “skills with wheels”.

There are three basic types of waterwheels, each with its own advantages and disadvantages. Each type has been in use since at least Roman times, and remained remarkably stable from AD500 to the mid-1700s, when a new type, turbines, began displacing them, but their heyday is beyond the time period of this lesson. 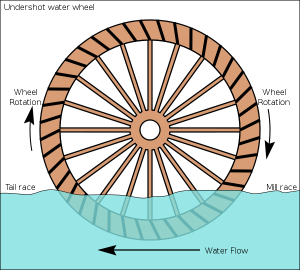 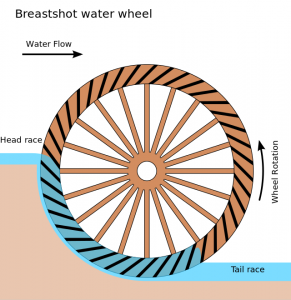