The La Brea Tar Pits are a group of tar pits around which Hancock Park was formed, in urban Los Angeles. Natural asphalt has seeped up from the ground in this area for tens of thousands of years. The tar is often covered with dust, leaves, or water. Over many centuries, the bones of animals that were trapped in the tar were preserved. The George C. Page Museum is dedicated to researching the tar pits and displaying specimens from the animals that died there. The La Brea Tar Pits are a registered National Natural Landmark.

Over century ago, the predecessor to the Natural History Museum of Los Angeles County began a two-year project to uncover the Ice Age creatures that became trapped in the La Brea Tar Pits. ‘Digs over the years have unearthed bones of mammoths, mastodons, saber-toothed cats, dire wolves and other unsuspecting Ice Age creatures that became trapped in ponds of sticky asphalt. But it’s the smaller discoveries – plants, insects and rodents – in recent years that are shaping scientists’ views of life in the region 11,000 to 50,000 years ago. 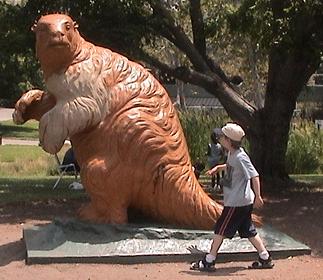 A life-size model of a giant sloth on the grounds of the La Brea tar pits.

In the first two decades of the twentieth century, hundreds of thousands of fossils were excavated from the Rancho La Brea Tar Pits. Prior to that time, these pits were unknown. When Spanish settlers first arrived in the area of Los Angeles in the eighteenth century, they found a number of tar springs located in the middle of a large plain at the foot of the Santa Monica Mountains.

Surrounding the springs was a scattering of animal bones visibly embedded within a layer of asphalt. It was not until the mid-1870s that people began to realize the remote antiquity of these bones. Soon after exploratory excavations began in the early 1900s, scientists were finding tar pits containing large numbers of fossils.

Tar pits are pools of gooey asphalt that are created when crude oil seeps up from deep inside the Earth through a crack or fissure. The less dense elements of the crude oil evaporate, leaving a deep, conical deposit of asphalt. Water pools atop the tar, attracting thirsty animals. As animals get stuck in the tar, predators are attracted to the trapped animals, and then they get stuck in the asphalt too. The animals’ bones, teeth, and other hard parts are well-preserved in this environment. 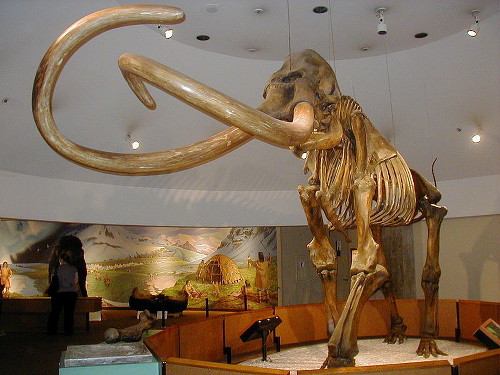 Many More Images of the La Brea Tar Pits at Wiki Commons. 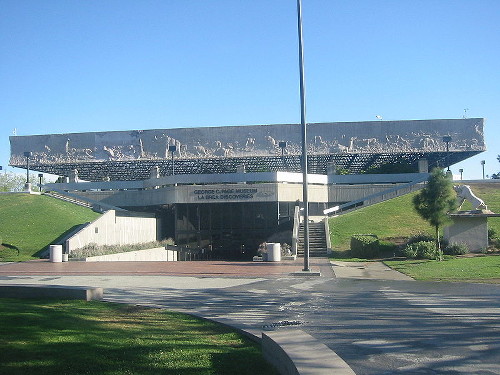