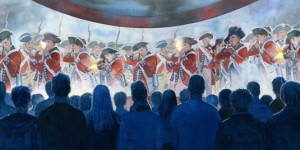 The Museum of the American Revolution, which is expected to open in Philadelphia in late 2016 will host Washington’s flag. The plain blue standard with 13 white, six-pointed stars traveled with George Washington to denote his presence as commander in chief of the 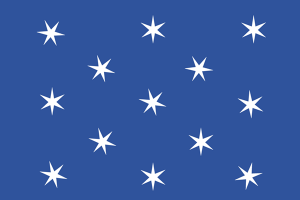 Washington’s flag first passed through the hands of his sister, Betty Washington Lewis, whose sons served their uncle during the war and afterward as private secretaries. Descendants donated it to the Valley Forge Historical Society — the museum’s predecessor organization — in 1910.

The standard measures about two feet by three feet, and was likely carried on a pole by a member of the cavalry before being planted wherever Washington made camp, Stephenson said.

Dye and fabric analysis indicate the delicate textile dates back to the late 18th century, said Virginia Jarvis Whelan, a conservator who helped preserve it. The new framed display uses special glass to filter out damaging light and better mounting to support it, she said.

The flag eventually will join other historical objects like swords, pistols, canteens and documents to help tell the story of the War of Independence. Incidentally, the museum’s marquee exhibit is a much larger piece of fabric related to Washington: the tent that served as his wartime home and command center. 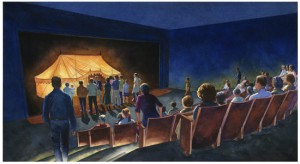