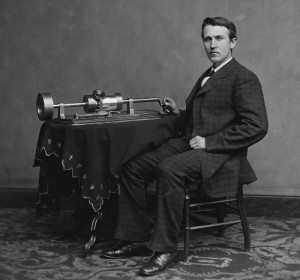 Thomas Alva Edison was an inventor and businessman. He developed many devices that greatly influenced life around the world, including the phonograph, the motion picture camera, and a long-lasting, practical electric light bulb. Dubbed The Wizard of Menlo Park, he was one of the first inventors to apply the principles of mass production and large-scale teamwork to the process of invention, and because of that, he is often credited with the creation of the first industrial research laboratory.

Thomas Edison was a prolific inventor, holding 1,093 US patents in his name, as well as many patents in the United Kingdom, France, and Germany. More significant than the number of Edison’s patents was the widespread impact of his inventions: electric light and power utilities, sound recording, and motion pictures all established major new industries world-wide. Edison’s inventions contributed to mass communication and, in particular, telecommunications. These included a stock ticker, a mechanical vote recorder, a battery for an electric car, electrical power, recorded music and motion pictures.

Edison with his phonograph, taken in Mathew Brady’s Washington, DC studio in April 1878

Alfred O. Tate was Edison’s associate and private secretary. In his book ”Edison’s open door: The life story of Thomas A. Edison, a great individualist” he offers insight into the personality of the world’s greatest inventor:

“Edison certainly at times employed methods that might be regarded as unorthodox, but it would be wrong to assume that he was not abreast of science. He not only subscribed to but read all the scientific journals. He had a thoroughly modern scientific library which constantly was augmented and which did not remain unread.

No one but himself could know to what extent he drew upon science and theory. He must have employed theory, because no forward step can be taken in experimentation unless the mind is projected ahead of it. Science may be described as ‘systemized knowledge.’ It has many branches, but in those which Edison pursued he unquestionably was familiar with all ‘systemized knowledge’ associated with them, and demonstrated at times his ability to project it.

In the year 1875 he discovered the waves that now enter every household ‘through the air’ to provide entertainment. They were called the ‘Edison Effect’ or ‘Etheric Force,’ and a number of patents were issued to him covering devices designed to utilize them.

Edison was not a mathematician. He had a method of his own of solving mathematical problems. His lack of knowledge of this science never seemed to be a handicap. His mind seemed to alight on the answer in one swift flight which perhaps he himself could not explain. It has been said that Newton never could demonstrate a problem in Euclid. The answers were to him so obvious that he could not restrain his mental processes long enough to follow the steps of a demonstration. That is the way Edison’s mind seemed to work. His esteem for mathematicians could not be described as extravagant. He had been subjected to the ridicule of these scientists in his earlier days when he was conducting his “empirical” experiments on the incandescent lamp. They lived to regret it..” 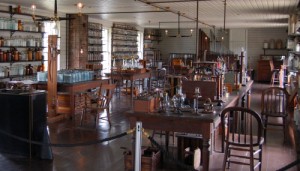 “…I recall one of Edison’s empirical experiments. He wanted to find a solvent of hard rubber, Science had not discovered it. Theory was helpless. So he resorted to empiricism. He had a storeroom of scientific chemicals that was complete. He immersed in vials containing one of each of these chemicals a small section of hard rubber. I do not recall how many there were, but it was an impressive collection. Later on I asked him how the experiment had turned out. ‘I got it,’ he said…

On one of these occasions when I was sitting beside him, he passed a clipping over to me in which he was referred to as a scientist. Then he said, ‘That’s wrong! I’m not a scientist. I’m an inventor. Faraday was a scientist. He didn’t work for money. Said he hadn’t time. But I do. I measure everything I do by the size of a silver dollar [silver dollars were current coin then]. If it don’t come up to that standard then I know it’s no good.’

His meaning was clear. If his work would sell, if the public would buy and pay their silver dollars for it, then he would know that it was useful. And that was his vocation – the production of new and useful inventions. He was a utilitarian inventor, and money was the only barometer that could be employed to indicate success.”

“One evening we were dining together at Delmonico’s [in New York City]…After dinner, when the bill was presented, Edison took a roll of notes out of his pocket, flattened it on the table, and began to pick at it. He disarranged it. Then he patted it around the edges, smoothed it out, and began to pick at it again. Then in disgust he pushed the pile across the table to me and said: ‘Here, Tate! You take the damn thing. Stick it in your pocket and pay our bills tonight.’

The reason for this was that he never, or very seldom, carried money, and while he made large sums, little of it passed through his hands in the form of currency. At his laboratory in Orange, if he had occasion to go to New York, I had carefully to see that he was provided with money. Otherwise he would have started without any. He derived no pleasure from the expenditure of money for personal gratification.

But in the expenditure of money for experimentation he never stopped to count the cost. It made no difference to him what the cost might be when he had an objective in view. This factor never entered his mind. He evaluated money not as something to be conserved or accumulated but as a vehicle essential to the progress of his work. If beyond this a surplus was accumulated, he was gratified, not because it represented wealth, but because it constituted tangible evidence of the utility of his inventions.”

You can learn much more by visiting Edison’s Menlo Park National Monument.