On December 14, 1903, Orville Wright and Wilbur Wright felt ready for their first attempt at powered flight. With the help of men from the nearby government life-saving station, the Wrights moved the Flyer and its launching rail to the incline of a nearby sand dune, Big Kill Devil Hill, intending to make a gravity-assisted takeoff. The brothers tossed a coin to decide who would get the first chance at piloting, and Wilbur won. The airplane left the rail, but Wilbur pulled up too sharply, stalled, and came down in about three seconds with minor damage.

Repairs after the abortive first flight took three days. When they were ready again on December 17, the wind was averaging more than 20 mph, so the brothers laid the launching rail on level ground, pointed into the wind, near their camp. This time the wind, instead of an inclined launch, helped provide the necessary airspeed for takeoff. Because Wilbur already had the first chance, Orville took his turn at the controls. His first flight lasted 12 seconds for a total distance of 120 ft or 36.5 m – shorter than the wingspan of a Boeing 747. 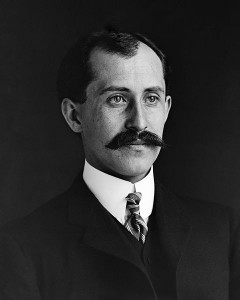 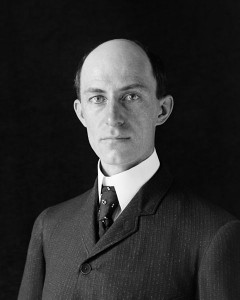 When we got up, a wind of between 20 and 25 miles was blowing from the north.

We got the machine out early and put out the signal for the men at the station. Before we were quite ready, John T. Daniels, W. S. Dough, A. D. Etheridge, W. C. Brinkley of Manteo, and Johnny Moore of Nags Head arrived.

After running the engine and propellers a few minutes to get them in working order, I got on the machine at 10:35 for the first trial. The wind, according to our anemometers at this time, was blowing a little over 20 miles (corrected) 27 miles according to the Government anemometer at Kitty Hawk. On slipping the rope the machine started off increasing in speed to probably 7 or 8 miles. The machine lifted from the truck just as it was entering on the fourth rail. Mr. Daniels took a picture just as it left the tracks.


I found the control of the front rudder quite difficult on account of its being balanced too near the center and thus had a tendency to turn itself when started so that the rudder was turned too far on one side and then too far on the other. As a result the machine would rise suddenly to about 10 ft. and then as suddenly, on turning the rudder, dart for the ground. A sudden dart when out about 100 feet from the end of the tracks ended the flight. Time about 12 seconds (not known exactly as watch was not promptly stopped). The lever for throwing off the engine was broken, and the skid under the rudder cracked. After repairs, at 20 min. after 11 o’clock Will made the second trial.

The course was about like mine, up and down but a little longer over the ground though about the same in time. Dist. not measured but about 175 ft. Wind speed not quite so strong.

With the aid of the station men present, we picked the machine up and carried it back to the starting ways. At about 20 minutes till 12 o’clock I made the third trial. When out about the same distance as Will’s, I met with a strong gust from the left which raised the left wing and sidled the machine off to the right in a lively manner. I immediately turned the rudder to bring the machine down and then worked the end control. Much to our surprise, on reaching the ground the left wing struck first, showing the lateral control of this machine much more effective than on any of our former ones. At the time of its sidling it had raised to a height of probably 12 to 14 feet.

At just 12 o’clock Will started on the fourth and last trip. The machine started off with its ups and downs as it had before, but by the time he had gone over three or four hundred feet he had it under much better control, and was traveling on a fairly even course. It proceeded in this manner till it reached a small hummock out about 800 feet from the starting ways, when it began its pitching again and suddenly darted into the ground.

The front rudder frame was badly broken up, but the main frame suffered none at all. The distance over the ground was 852 feet in 59 seconds. The engine turns was 1071, but this included several seconds while on the starting ways and probably about a half second after landing. The jar of landing had set the watch on machine back so that we have no exact record for the 1071 turns. Will took a picture of my third flight just before the gust struck the machine.

The machine left the ways successfully at every trial, and the tail was never caught by the truck as we had feared.

After removing the front rudder, we carried the machine back to camp. We set the machine down a few feet west of the building, and while standing about discussing the last flight, a sudden gust of wind struck the machine and started to turn it over. All rushed to stop it. Will who was near one end ran to the front, but too late to do any good. Mr. Daniels and myself seized spars at the rear, but to no purpose. The machine gradually turned over on us. Mr. Daniels, having had no experience in handling a machine of this kind, hung on to it from the inside, and as a result was knocked down and turned over and over with it as it went. His escape was miraculous, as he was in with the engine and chains. The engine legs were all broken off, the chain guides badly bent, a number of uprights, and nearly all the rear ends of the ribs were broken. One spar only was broken.