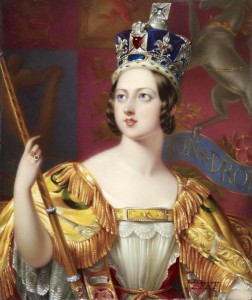 Queen Alexandrina Victoria was Queen of the United Kingdom of Great Britain and Ireland from June 20, 1837 until her death, January 1, 1901. From May 1, 1876, she used the additional title of Empress of India.

Queen Victoria reigned 63 years and seven months, which is longer than that of any other British monarch and the longest of any female monarch in history. Queen Victoria’s rein is known as the Victorian era. It was a period of industrial, cultural, political, scientific, and military change within the United Kingdom, and was marked by a great expansion of the British Empire. 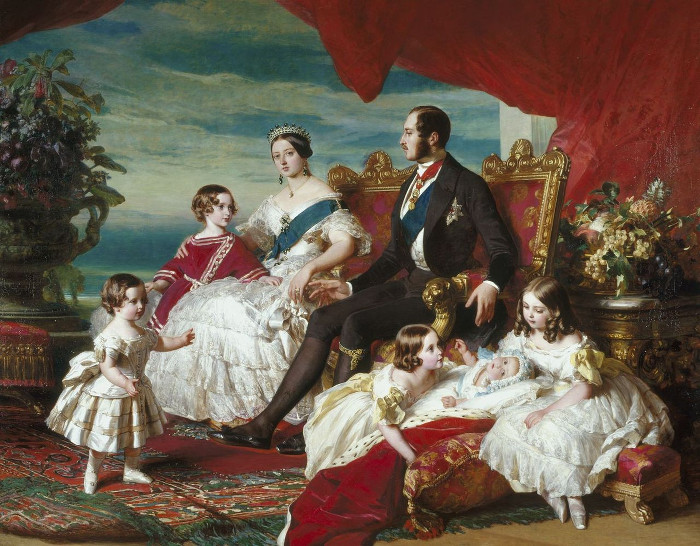 Victoria’s family in 1846 by Franz Xaver Winterhalter left to right: Prince Alfred and the Prince of Wales; the Queen and Prince Albert; Princesses Alice, Helena and Victoria

In 1897, Victoria had written instructions for her funeral, which was to be military as befitting a soldier’s daughter and the head of the army. She was to be dressed in white instead of black.

Queen Victoria She was dressed in a white dress and her wedding veil.

An array of mementos commemorating her extended family, friends and servants were laid in the coffin with her, at her request, by her doctor and dressers. One of Albert’s dressing gowns was placed by her side, with a plaster cast of his hand, while a lock of John Brown’s hair, along with a picture of him, was placed in her left hand concealed from the view of the family by a carefully positioned bunch of flowers. Items of jewelry placed on Victoria included the wedding ring of John Brown’s mother, given to her by Brown in 1883. Her funeral was held on Saturday, 2 February, in St George’s Chapel, Windsor Castle, and after two days of lying-in-state, she was interred beside Prince Albert in Frogmore Mausoleum at Windsor Great Park. As she was laid to rest at the mausoleum, it began to snow. 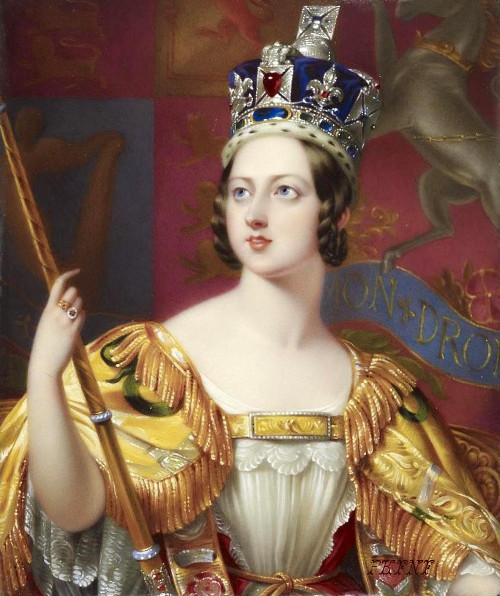 Queen Victoria in her coronation robes

The Countess of Denbigh was a witness to the beginning of Queen Victoria’s final journey to her burial at Windsor Castle. in a letter to a friend, she describes the scene as the Queen’s body leaves the Isle of Wight aboard a British Navy ship:

Queen Victoria’s last journey: I went out on the Scot, where both Houses were embarked …The day was one of glorious sunshine, with the smoothest and bluest of seas. After a while a black torpedo destroyer came dashing down the line signaling that the Alberta was leaving Osborne and from every ship, both British and foreign, boomed out the minute guns for close on an hour before the procession reached us.

The sun was now (3pm) beginning to sink, and a wonderful golden pink appeared in the sky and as the smoke slowly rose from the guns it settled in one long festoon behind them, over Haslar, a purple festoon like the purple hangings ordered by the King.

Then slowly down the long line of battleships came eight torpedo destroyers, dark gliding forms, and after them the white Alberta looking very small and frail next the towering battleships. We could see the motionless figures standing round the white pall which, with the crown and orb and sceptre, lay upon the coffin. Solemnly and slowly, it glided over the calm blue water, followed by the other three vessels, giving one a strange choke, and a catch in one’s heart as memory flew back to her triumphal passage down her fleet in the last Jubilee review.

As slowly and as silently as it came the cortege passed away into the haze: with the solemn booming of the guns continuing every minute till Portsmouth was reached. A wonderful scene and marvellously impressive, leaving behind it a memory of peace and beauty and sadness which it is impossible to forget.

On February 4, 1901, Queen Victoria’s coffin was drawn from the Albert Memorial Chapel, Windsor, to the Mausoleum, accompanied by the Royal family. Christopher Hibbert quotes the following description from Maurice Brett’s “Journal and Letters of Reginal, Viscount Esher:

Of all the ceremonials, that in the Mausoleum was the simplest and most impressive. The procession from the sovereign’s entrance, the Princess of Wales leading Prince Edward, the other children walking, was very touching and beautiful. At the Mausoleum, the arrangements were left to me. Everyone got into the Chapel and the iron gates were closed…the guardsmen brought in the coffin. The King and the Princes and Princesses standing on the right. The choir on the left…Of all the mourners the Princess of Wales and the young Duke of Coburg displayed the most emotion.

The King came first alone, but instead of simply walking by, he knelt down by the grave. Then the Queen followed, leading the little Prince Edward by the hand. She knelt down, but the little boy was frightened, and the King took him gently and made him kneel beside him, and the three, in perfect silence, were there together – a sight not to be forgotten. Then they passed on, and the Emperor came and knelt likewise, and so in turn all the rest of the Royal Family in a continuous string. Then the Household or at least the few who had been invited to be present. As we left the building the rain or sleet began to fall.

When she succeeded her uncle, William IV, in 1837, the monarchy was probably less popular than at any time since the 17th Century. By the end of the reign, the crown had been raised to new heights of prestige and affection, and the British Empire ruled much of the world.

Queen Victoria’s Funeral was one of the earliest events recorded by British Pathe. After 63 years on the throne, Victoria died at the age of 81 at Osborne House on The Isle of Wight. Her military state funeral was held on Saturday 2 February 1901 in St. George’s Chapel, Windsor Castle. John Humphrys narrates.

Additional Pictures of Queen Victoria is available from Wiki Commons.