The Pan-American Exposition was a World’s Fair held in Buffalo, New York, United States, from May 1 through November 2, 1901. The fair occupied 350 acres of land on the western edge of what is now Delaware Park, extending from Delaware Avenue to Elmwood Avenue and northward to Great Arrow Avenue. 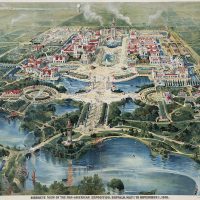 “Doing The Pan” The 1901 Pan-American Exposition
“Among the great fairs of the world the Pan-American will hold an honorable place.”
– Robert Grant, Cosmopolitan Magazine September 1901

More images can be found Here at Wiki Commons.