The Battle of Midway is a 1942 American documentary film short directed by John Ford. It is a montage of color footage of the Battle of Midway with voice-overs of various narrators, including Johnny Governali, Donald Crisp, Henry Fonda, and Jane Darwell.

The film begins with narrator, Ray Milland, explaining where Midway Island is and its strategic importance. About five minutes into the film the format changes somewhat, with more leisurely pictures of the G.I.s at work on the island, and then a female voice over. The female voice over, Verna Felton, takes the personality of a middle aged woman from Springfield, Ohio, who is a mother-type figure pointing out how she recognizes a boy from her home town. The boy is Army Air Force pilot William E. “Junior” Kinney. Then stock footage of the Kinney family back home is introduced.


Abruptly the narrative turns to the battle itself with approximately five minutes dedicated to the defense of the island, the naval battle, and the aftermath. At the end the various known Japanese losses are shown, four aircraft carriers, battleships, aircraft etc. and then brushed over with red paint.

John Ford was a veteran of the Battle of Midway, where he was wounded in the arm by shrapnel while filming the Japanese attack from the power plant of Sand Island on Midway.

Movements and deployment during the Midway battle

The Battle of Midway was a crucial and decisive naval battle in the Pacific Theater of World War II. Between June 3 and 7 1942, only six months after Japan’s attack on Pearl Harbor and one month after the Battle of the Coral Sea, the United States Navy under Admirals Chester Nimitz, Frank Jack Fletcher, and Raymond A. Spruance decisively defeated an attacking fleet of the Imperial Japanese Navy under Admirals Isoroku Yamamoto, Chuichi Nagumo, and Nobutake Kondo near Midway Atoll, inflicting devastating damage on the Japanese fleet that proved irreparable. Military historian John Keegan called it “the most stunning and decisive blow in the history of naval warfare.” 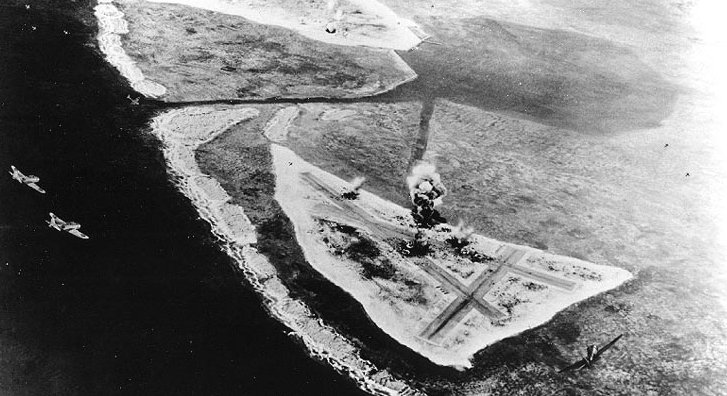 Time Line of The Battle of Midway 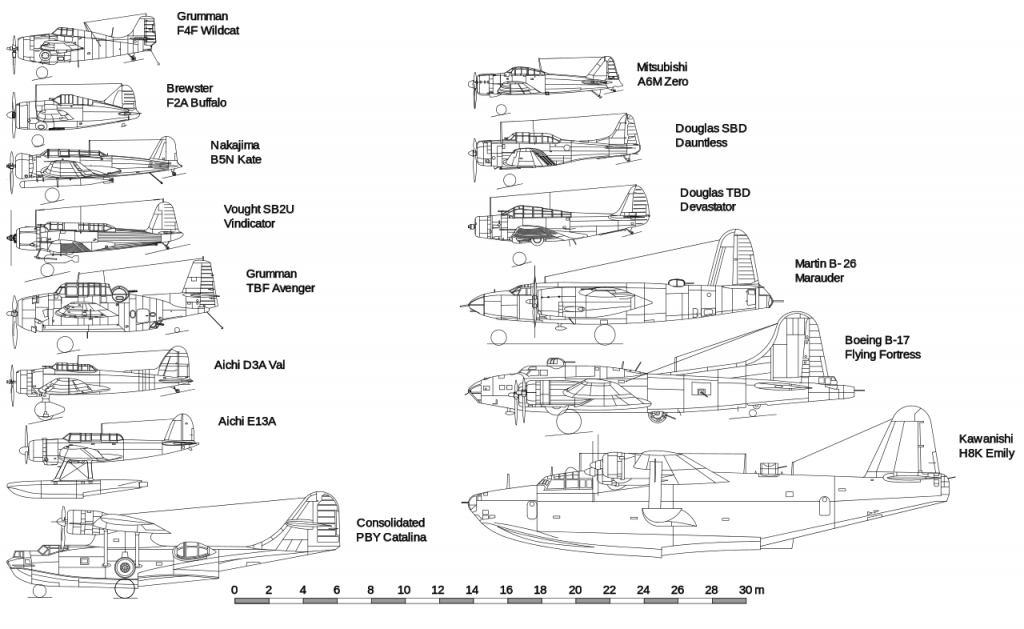 Aircraft at Battle of Midway 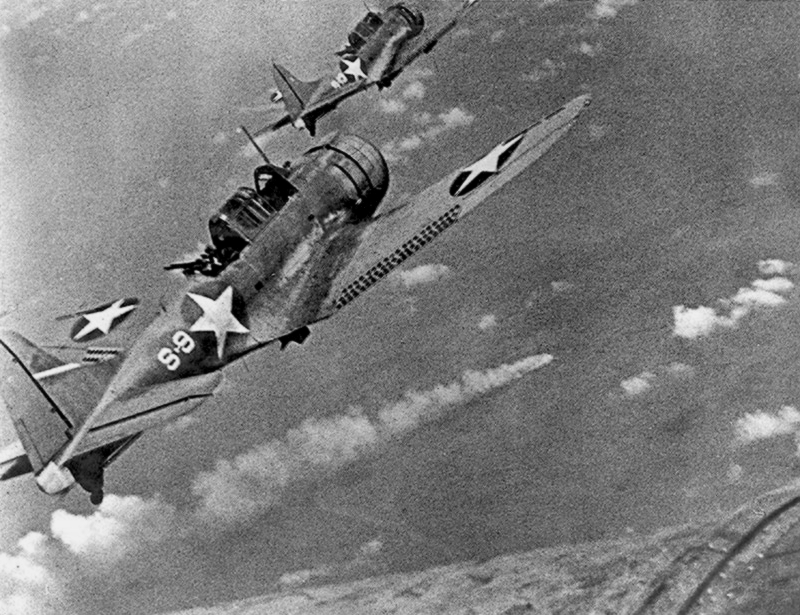 U.S. Douglas SBD-3 Dauntless dive bombers from the USS Hornet about to attack the burning Japanese cruiser Mikuma for the third time on 6 June 1942 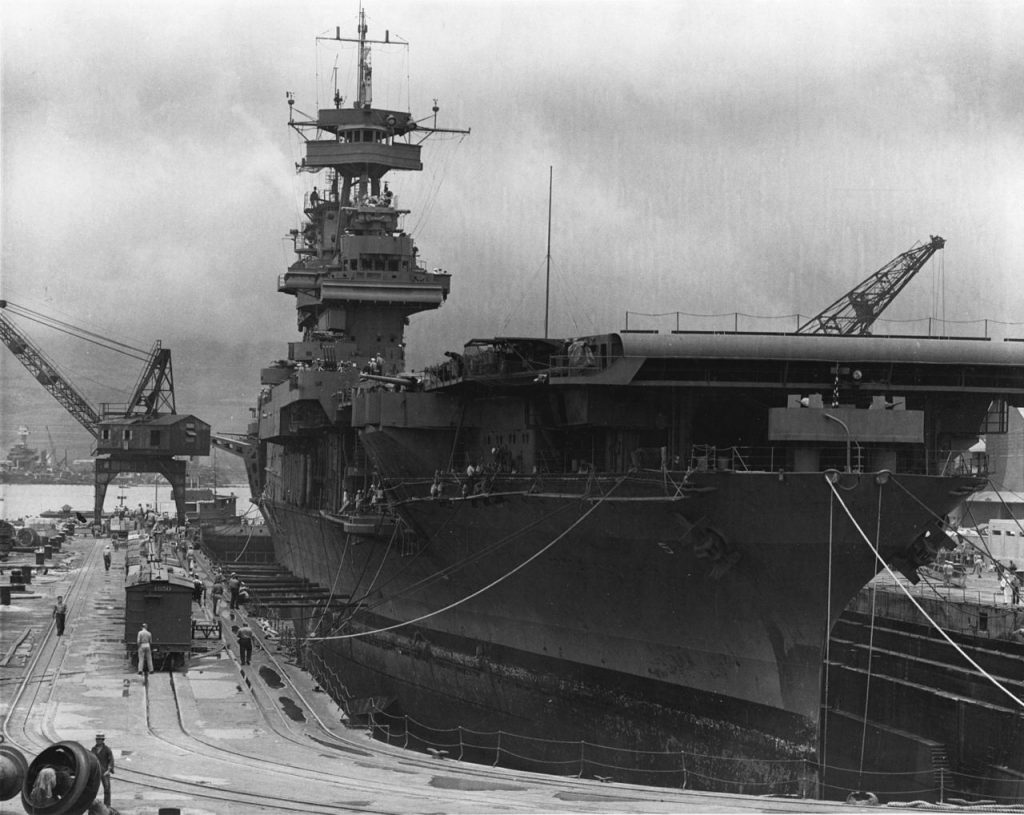 USS Yorktown at Pearl Harbor days before the battle 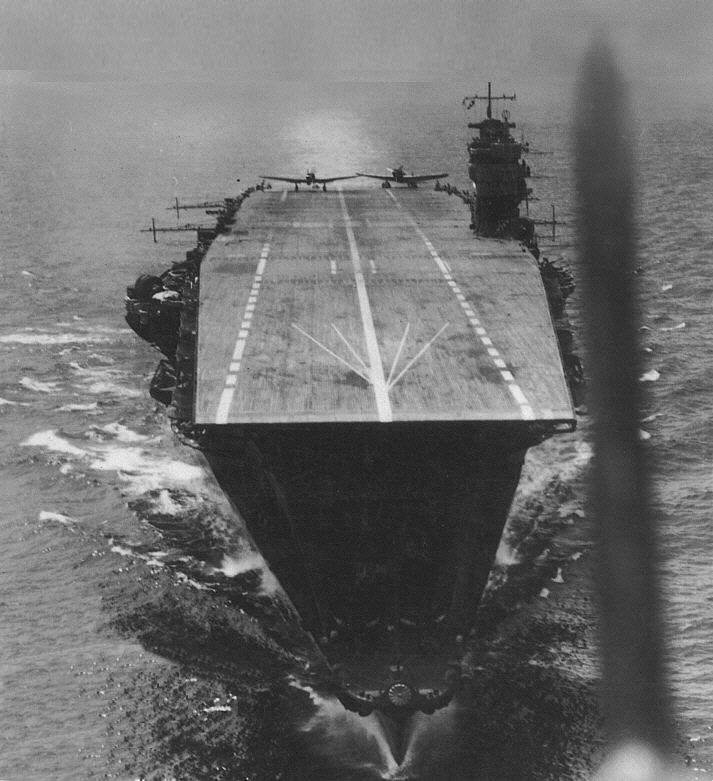 Akagi, the flagship of the Japanese carrier striking force

Akagi, the flagship of the Japanese carrier striking force which attacked Pearl Harbor, as well as Darwin, Rabaul, and Colombo, in April 1942 prior to the battle. 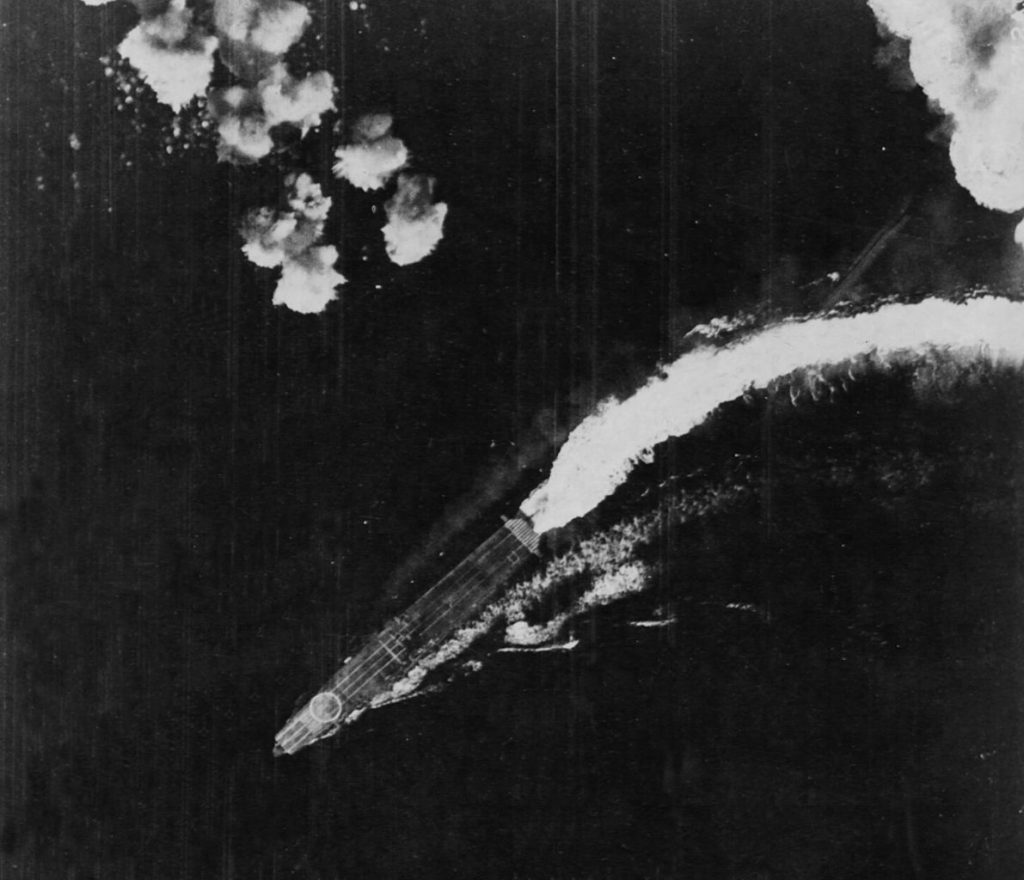 A B-17 attack misses Hiryū 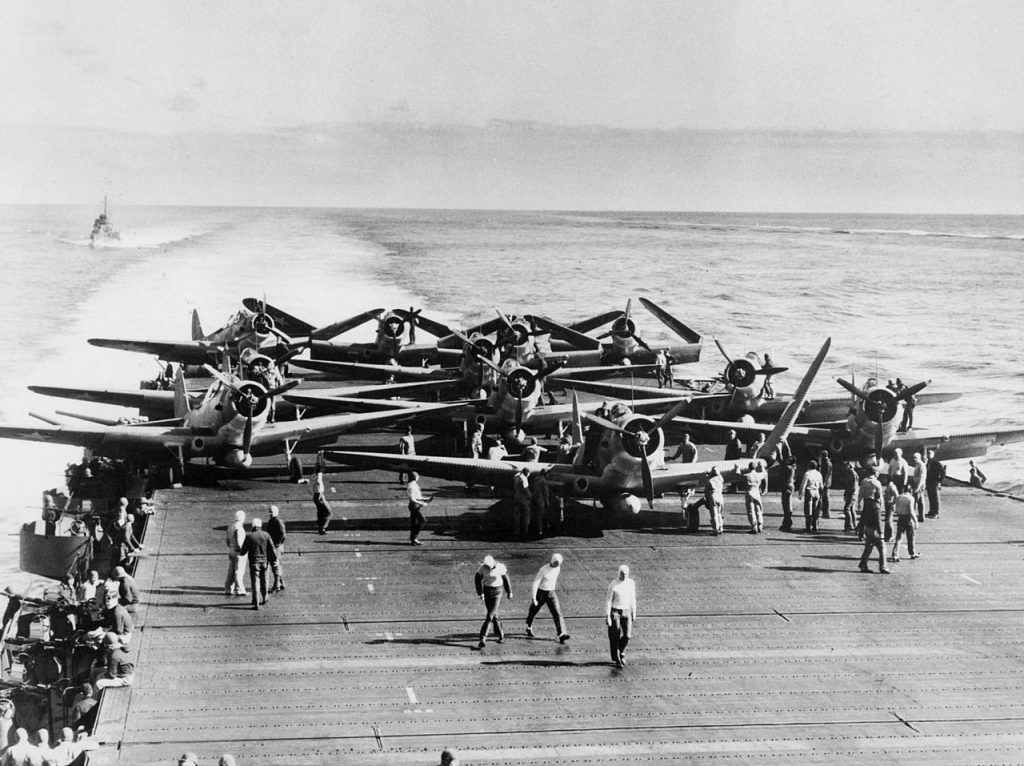 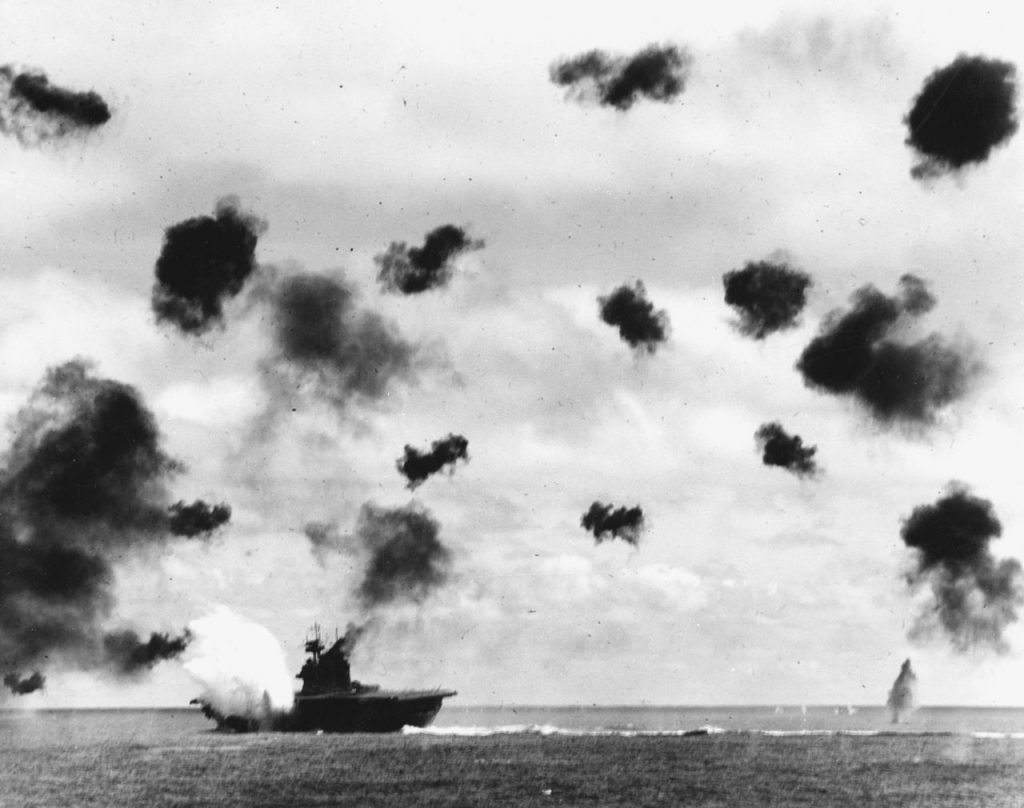 Yorktown at the moment of impact of a torpedo 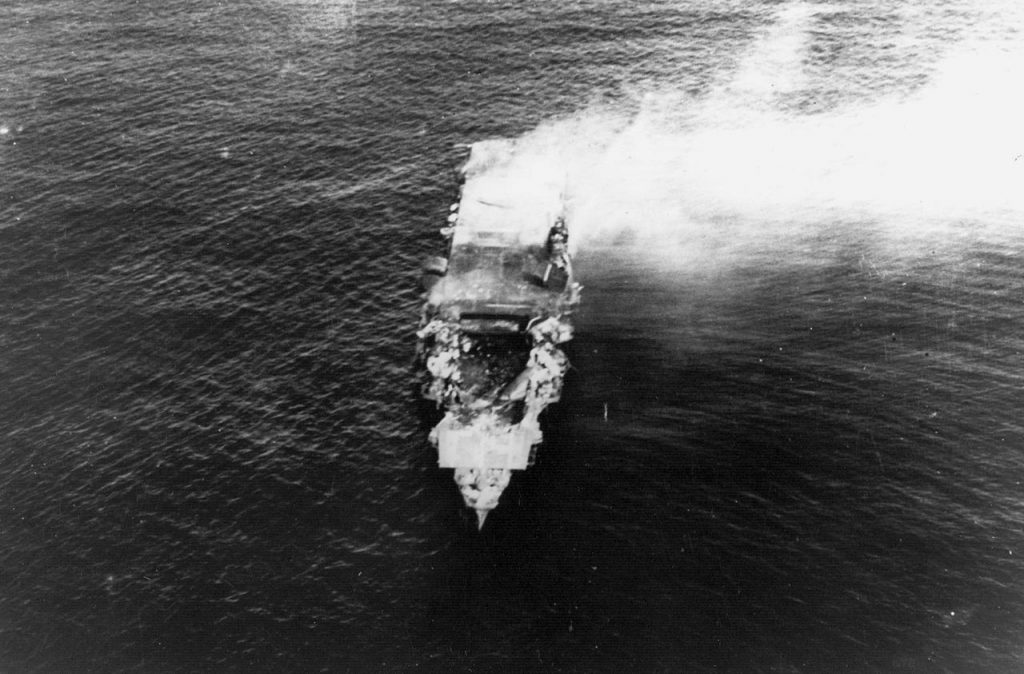 Hiryū, shortly before sinking. This photo was taken by Special Service Ensign Kiyoshi Ōniwa from a Yokosuka B4Y off the carrier Hōshō. 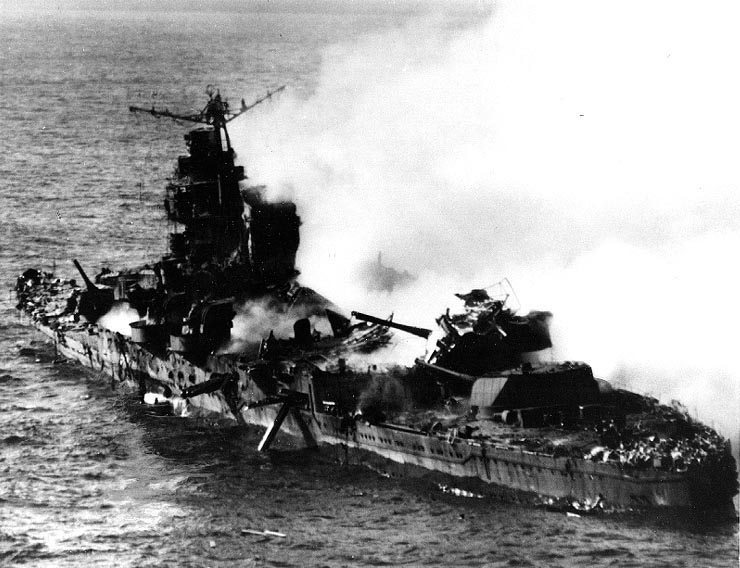