Warning: "continue" targeting switch is equivalent to "break". Did you mean to use "continue 2"? in /homepages/29/d203955307/htdocs/allwoodc/courier/wp-content/plugins/social-networks-auto-poster-facebook-twitter-g/inc/nxs_functions_engine.php on line 175
 Libraries and Teens | Allwood Courier ↓
Home Menu ↓
Home→Library→Libraries and Teens

Historically, libraries have served young children and adults. Teenagers were written off. Teens are a group that libraries tend to lose. Once they turn 16 they are gone from the library. Teens want to create their own space, which is one thing that was keeping them from the library. They never felt welcome. 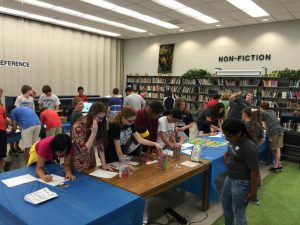 In addition to digital studios, libraries nationwide have begun to offer dedicated, tech-rich teen spaces. Arlington’s library has The Hub, a large glassed-in room where teens study in groups, play video games or design products with a 3-D printer. The Vortex is Bolingbrook’s similar space in the Fountaindale Public Library. Staff at both sites report the spaces are packed every afternoon after school.

The New York Public Library opened its first full-floor dedicated teen space in a branch last year. NYPL converted 4,400 square feet of unused space into a colorful environment with bleacher-style seating. This creates a place where teens can be themselves and a little louder.

Chicago Public Library recently rolled out several new services. All of its 80 branches offer Teacher in the Library, an after-school program to aid students with homework. In the summer, Chicago instituted the Summer Learning Challenge to counteract students’ usual “summer slide” after school lets out: 71,000 students read a reported 2.1 million books.

Modern libraries feature computer labs where patrons learn tech skills. Arlington programs more than 50 tech classes each month on Microsoft Office and social media sites, such as LinkedIn, Pinterest and Twitter. Standard computer use is down slightly, but tech classes are booming. Librarians have been touting their shift to community learning centers for about a decade, yet public perception lags behind.

Things that will make Teens feel comfortable at the local library.

How will your local library bring in the teens?