Warning: "continue" targeting switch is equivalent to "break". Did you mean to use "continue 2"? in /homepages/29/d203955307/htdocs/allwoodc/courier/wp-content/plugins/social-networks-auto-poster-facebook-twitter-g/inc/nxs_functions_engine.php on line 175
 The Last Cavalry Charge | Allwood Courier ↓
Home Menu ↓
Home→iHist→The Last Cavalry Charge

The Charge of Burkel was a skirmish between Belgian and German forces in October 1918, during the First World War. It is notable as the last cavalry charge in Western Europe. 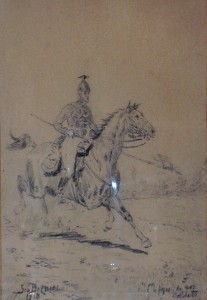 In the afternoon of the 19 October, Major Victor Van Strydonck in command of two squadrons of the 1st Regiment of Guides received orders to “cross the enemy lines by surprise. Once arrived at Burkel, attack the enemy from behind…”


The first group of the regiment, under Colonel Jooris, was stopped by machine gun fire and was forced to continue the battle on foot, calling on artillery fire to help create a breach.

To the cry of “Forward, My Children! For The King!” the cavalry charged the enemy rear-guard at 04:30PM. The charge was headed by two armored cars. After advancing in silence, they charged German positions in the forest of Burkel. The first line of trenches was overwhelmed, allowing the cavalry to ride more than three kilometers further before confronting the second line of German machine guns, which they also captured and occupied. As the armored cars had been immobilized, the cavalry were ordered to attack the second line of machine guns on foot. By 05:00 PM, the Germans, who had been taken off balance by the charge, began to retreat across the sector.

The charge was celebrated in Belgium and the battle honor “Burkel” added to the standard of the 1st Guides. Van Strydonck, who had commanded the charge, was made a Baron and given the title “de Burkel” in recognition of his heroism. During the Second World War, he would serve as commander of the Free Belgian Forces in the United Kingdom.