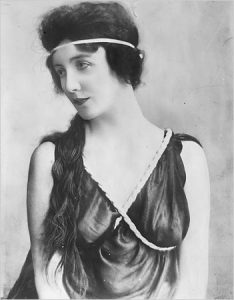 Audrey Marie Munson was an American artist’s model and film actress, known variously as “Miss Manhattan,” “The Exposition Girl<.i>,” and “American Venus.” She was the model or inspiration for more than fifteen statues in New York City and appeared in four silent films. 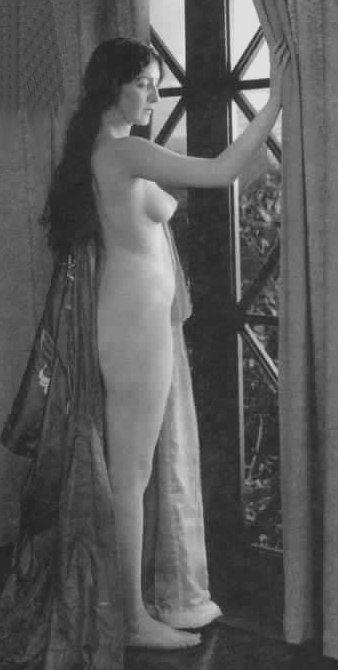 A model in the early 20th century, she was the first person to appear nude in a feature film, Inspiration (1915). She had a promising career as a model and budding film actress when she was in her early 20s, but her career was destroyed by a murder scandal of which she was involuntarily a part but in which she shared no guilt. Abandoned and forgotten by her family, she spent the last 60 of her 105 years in a mental institution. 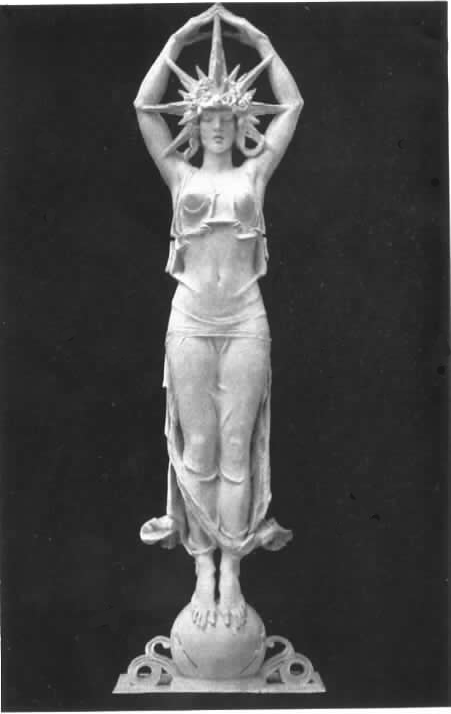 In 1906, when Munson was 15 years old, she was spotted in the street by photographer Ralph Draper, who in turn introduced her to his friend, sculptor Isidore Konti. Konti persuaded the young woman to model for him. For the next decade, Munson became the model of choice for a host of sculptors and painters in New York City. By 1915, she was so well established that she was chosen by Alexander Stirling Calder as the model of choice for the Panama-Pacific International Exposition held that year. She posed for three quarters of the sculptures at that event as well as for numerous paintings and murals 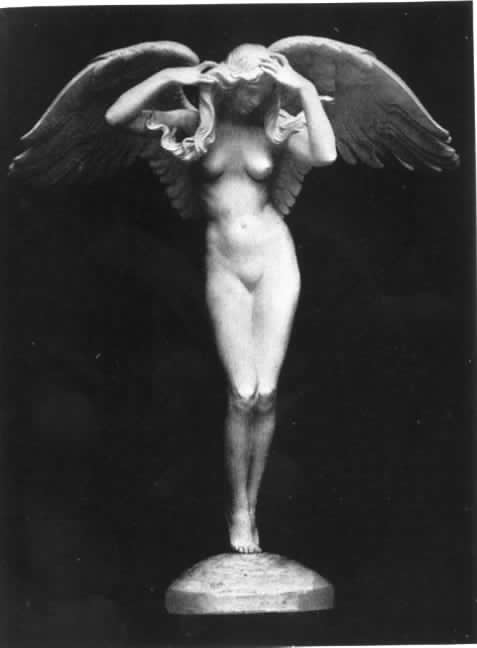 Fountain of the Setting Sun (1915) by Weinman 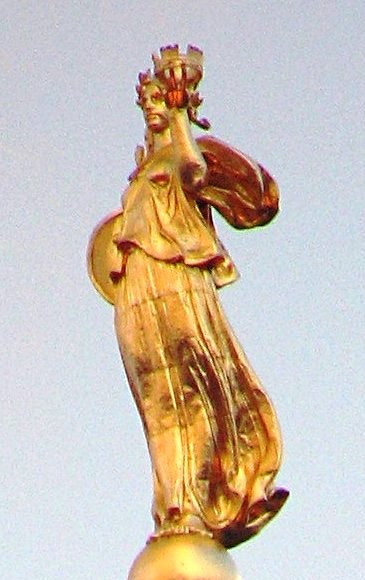 Civic Fame statue on top of the Manhattan Municipal Building

In 1915, probably as a result of her exposure in California at the PPIE, Munson moved to California and entered the nascent film industry, starring in four silent films. The first, Inspiration (1915), the story of a sculptor’s model, was the first time that a woman appeared fully nude in an American motion picture. The censors were reluctant to ban the film, fearing they would also have to ban Renaissance art. Munson’s films were a box office success, while reviews were polarized. Only a single print of one of Munson’s films, Purity (1916), has survived.

AUDREY MUNSON Was selected from hundreds of beautiful women to post for the official statuary of the Panama Exposition, the central figure on the Maine Monument in Central Park, New York. 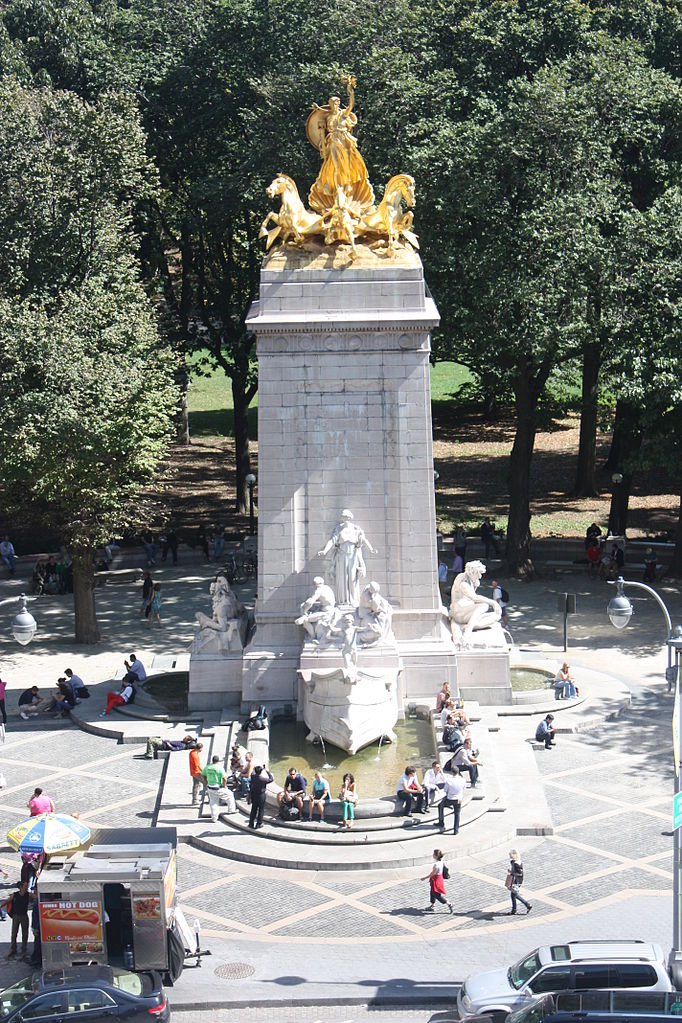 The Maine Monument stands at Merchant’s Gate of Central ParkNew York City. The monument honors the 258 American sailors who perished when the battleship Maine exploded in the harbor of Havana, Cuba, then under Spanish rule. The causes of the February 15, 1898 explosion remain unclear, but by April of that year, Spain had declared war on the United States. 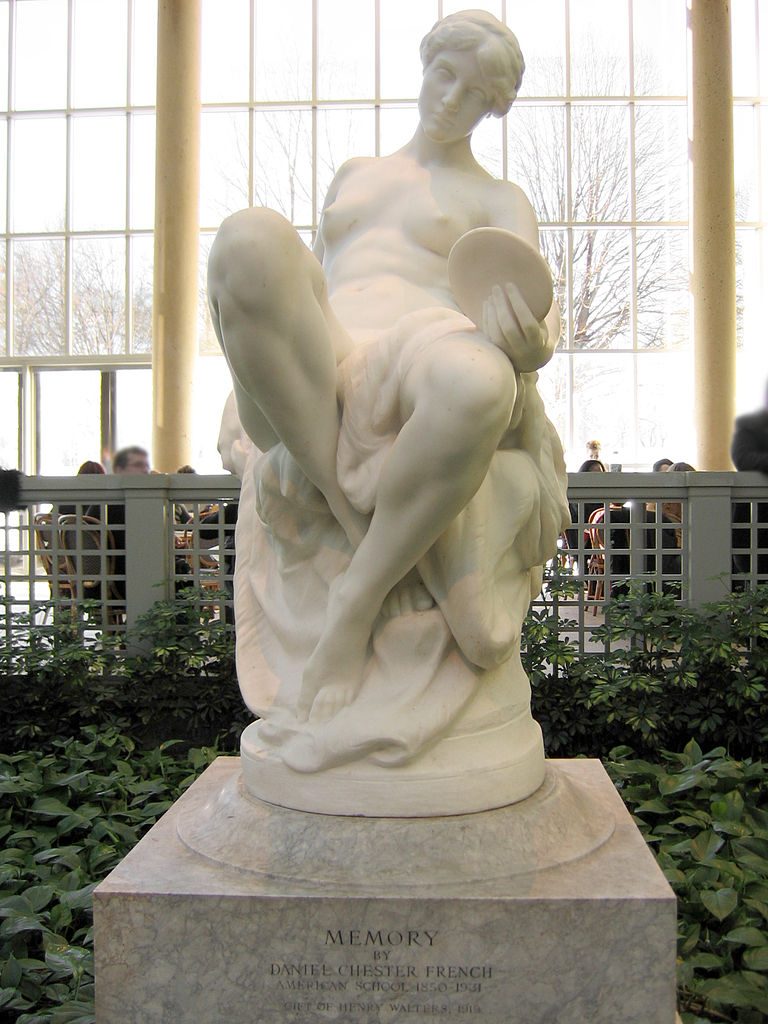 Memory, this carving in marble by the Piccirilli Brothers and Daniel Chester French. Metropolitan Museum of Art, New York City. 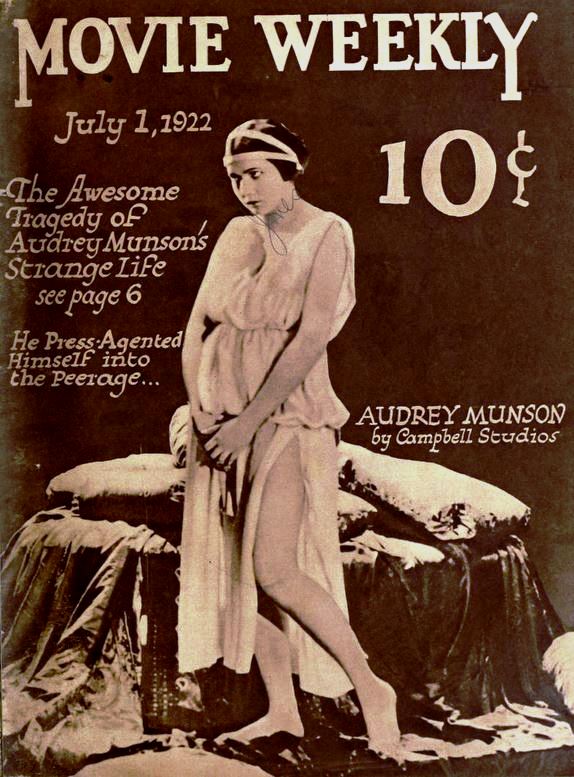 Actress and model Audrey Munson on the cover of the July 1, 1922 Movie Weekly, from a still from the American film Heedless Moths 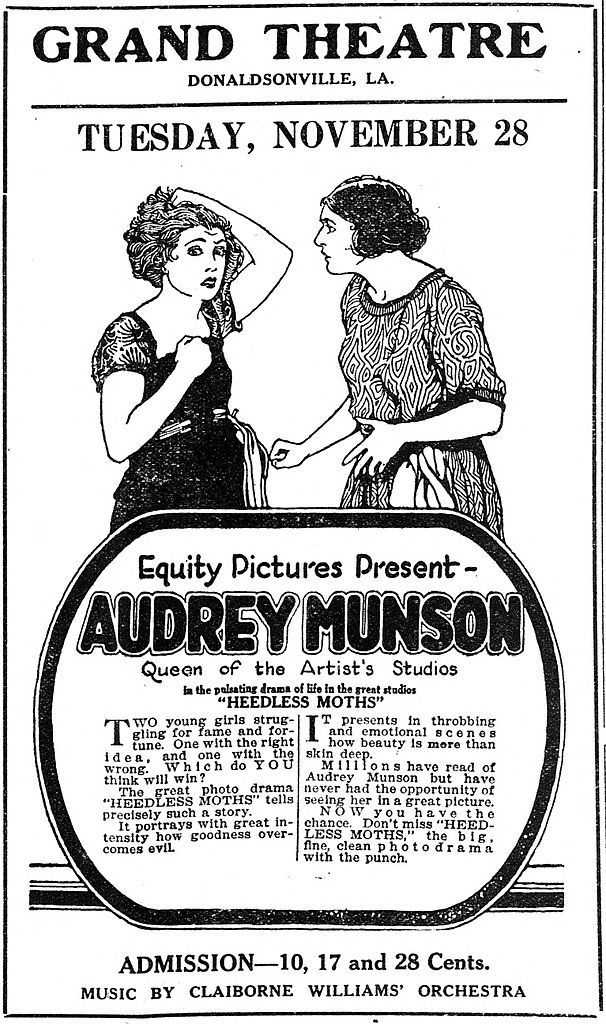 Heedless Moths is a 1921 American silent melodrama film written and directed by Robert Z. Leonard. This is a newspaper advertisement for the film. 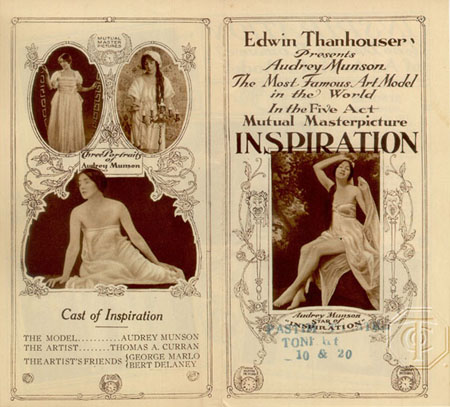 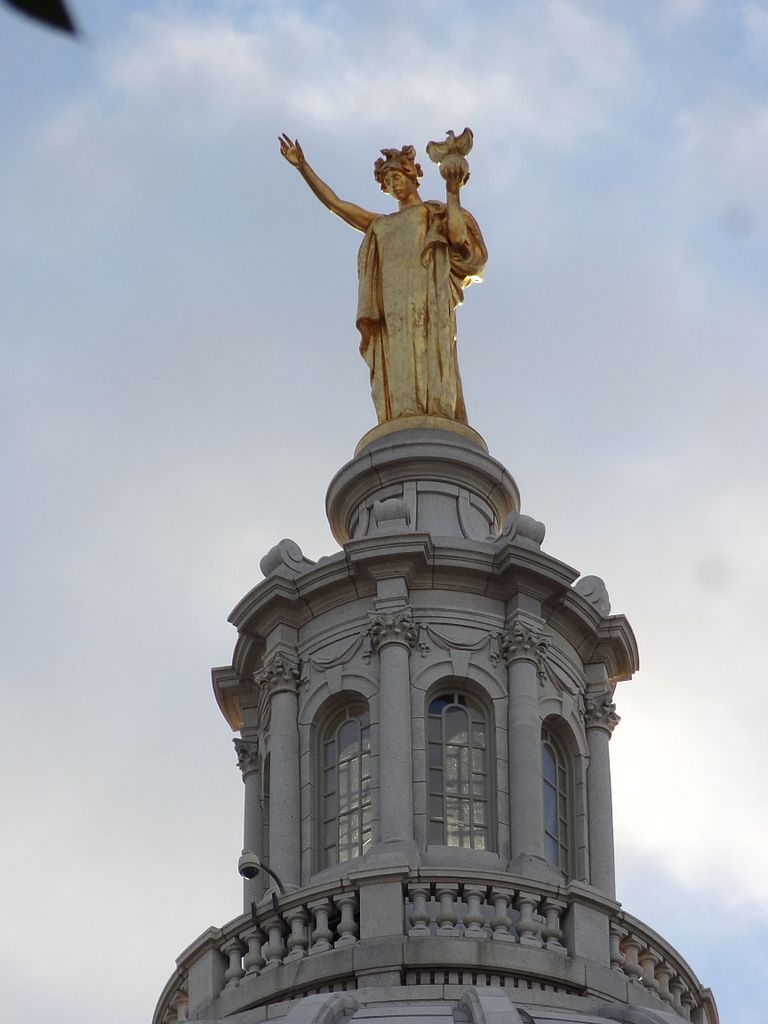 “Wisconsin” on top of the Wisconsin Capitol Building created by Daniel Chester French.

This work, often referred to as the “Golden Lady,” consists of an allegorical figure reminiscent of Athena, dressed in Greek garb, her right arm outstretched to symbolize the state motto, “Forward”, and wearing a helmet topped by a badger, the Wisconsin state totem. In the left hand it holds a globe with an eagle perched on top. Across the eagle’s chest is a large W, for Wisconsin,. Note the security camera added somewhere between 2006 and 2011. 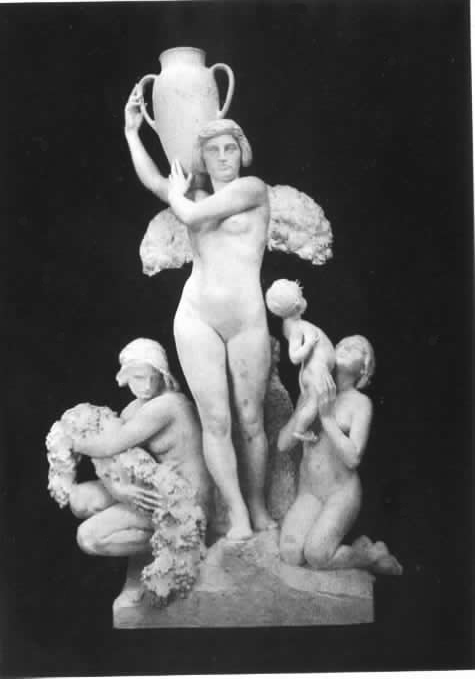 Autumn. The model for this sculpture was Audrey Munson. The sculptor was Furio Piccirilli 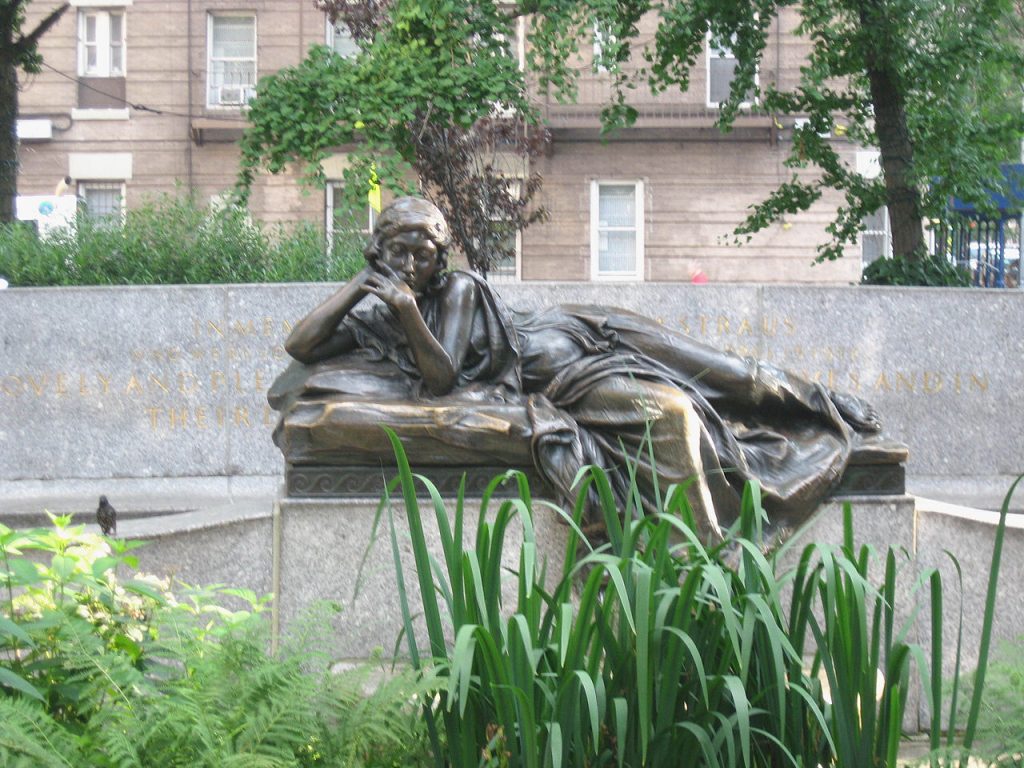